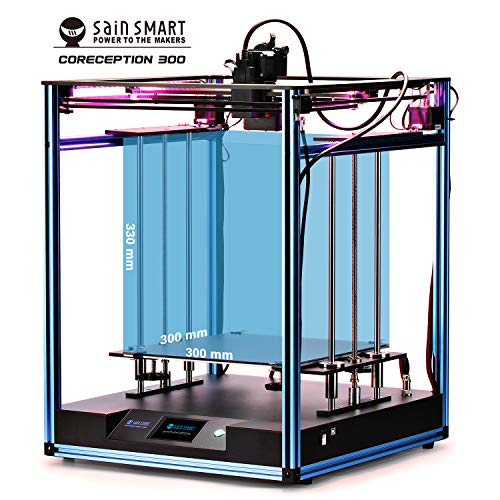 The Coreception is a cost-effective 3D printer that is suitable for hobbyists and professionals alike,
made highly popular because it delivers higher quality 3D prints. One major advantage of this 3D
printer is the excellent stability from using a dual Y-axis control system and box-like
frame.Assembling a Coreception is much easier than other printers and can be completed within
25 minutes, giving you an easy start in 3D printing if this is your first time.

1 x Coreception 3D Printer (Some parts need to be assembled)

Formlabs – a United States company that produces resin-based 3D printers – is now going to be officially offering their new Form 2 printer in South Africa thanks to a distribution partnership with Johannesburg company Build Volume.

The Form series of printers began with a Kickstarter campaign for the 3D printer – the Form 1. Unlike “traditional” printers which use plastic fillament such as PLA and ABS, the Form 1 uses a process called Stereolithography (SL), in which a laser is used to solidify certain points in a pool of liquid plastic risen, which then hardens into a print.

This process provides fantastic quality and resolution thanks to layer thickness as thin as 25 microns and a minimum feature size (the smallest possible distinguishable parts a printers can produce) of 300 microns. The downside to this accuracy and quality is price, which was previously hundreds of thousands of rands. The Form 1, on the other hand cost around R35 000 to buy in the US when it was available.

The Form 1 has since been superseded by the Form 1+ and now the Form 2. The Form 2 – which costs $3 500 (R48 200) in the US – improves on its predecessors with a larger build volume, touch-screen controls, Wifi connectivity, and a host of other improvements. And it’s magical to watch:

Build Volume, a company offering everything needed to get going with 3D printing, including hardware, software and training is now an official reseller of the Form 2. Currently, the Form 1+ is still available for purchase for R51 850 from their online store. Build Volume has told us that the Form 2 will be available from next year and, while the price has not been confirmed as yet, pre-order pricing should be available before the end of 2015. The various types of resin needed for Formlabs’ printers are also available from Build Volume.

This partnership is part of Formlabs’ growth around the world and the addition of four other distribution partners: Creative Tools ,Systematics, 3bFAB and 3Developer will be providing Formlabs products to the Scandinavian, Middle East, EMEA and South Asian markets respectively.

Strangely, Europe, the Middle East and Africa (known as EMEA) usually include South Africa, so its a welcome change for our little country to get its own distributor – and hopefully more comprehensive, local support.

“3D printing mistakes can cost considerable time, material and money,” said CHGT CEO Marco Valenzuela. “We’ve gotten a tremendous reception following our highly successful portal launch, but we’re by no means finished with the site. The launch was just the first step. With this valuable tool, users will now have an easier time completing complex work. And it will allow us to build a strong reputation throughout the global 3D printing community as a ‘one-stop shop’ for users of all skill levels, greatly enhancing our already promising revenue prospects.”

The upcoming 3D printing advisor tool would offer portal users suggestions on printing materials and processes based on unique project needs and requirements.

Changing Technologies, Inc. (CHGT) is an emerging technology company focused on developing innovative concepts to bring to consumers. It recently created a new subsidiary — 6th Dimension Technologies — to pursue additional growth areas and market needs in the booming 3D printing sector. A forward-thinking company working to be at the forefront of the next generation of consumer-based technology, CHGT is positioning itself to leverage global demand for the latest technological advances and services the company offers. Changing Technologies, Inc. is in the cutting-edge technology sphere alongside companies like Voxelijet AG (VJET), Arcam AB (AMAVF), and ExOne Co. (XONE).

Safe Harbor Statement under the Private Securities Litigation Reform Act of 1995: This news release contains forward-looking information within the meaning of Section 27A of the Securities Act of 1933, as amended, and Section 21E of the Securities Exchange Act of 1934, as amended, including statements that include the words “believes,” “expects,” “anticipates” or similar expressions. Such forward-looking statements involve known and unknown risks, uncertainties and other factors that may cause the actual results, performance or achievements of the Company to differ materially from those expressed or implied by such forward-looking statements. In addition, description of anyone’s past success, either financial or strategic, is no guarantee of success. This news release speaks as of the date first set forth above and the Company assumes no responsibility to update the information included herein for events occurring after the date hereof.

COLLIER COUNTY, Fla.- 3D printers can make just about anything, from toys to limbs and even guns. Residents will now have access to 3D printing at local libraries.

“Anything you could possibly think of, the printer brings it to life,” said St. Firman.

The cooperative just got a 3D printer to loan to libraries across Southwest Florida.

The machine has only been in the area for two weeks and there’s already a waiting list.

WINK News discovered Collier County may be getting four of the machines to put in its local libraries.

Instead of ink, the printer uses plastic or metal. The machine then prints, or really builds, anything you design.

That curiousity is prompting some people across the country to make weapons with the printers,  even guns.

Some residents tell WINK News they’re concerned about what would happen if they’re accessible in a public library.

“If people are printing out guns that are 3D that looks like a real gun and you’re carrying it around, it’s a safety hazard,” said Alyssa Stone.

SWFLN Executive Director Luly Castro says someone is always supervising the printer. In the future, she expects local lawmakers to make some guidelines.

“Policies are going to have to be developed for responsible use,” said Castro. “I don’t think anyone’s gonna come in and say ‘I wanna build a gun, help me.'”

The 3D printer cost about $3,000 dollars and was paid for through a grant.

County commissioners will discuss putting the 3D printers in local libraries next Tuesday.