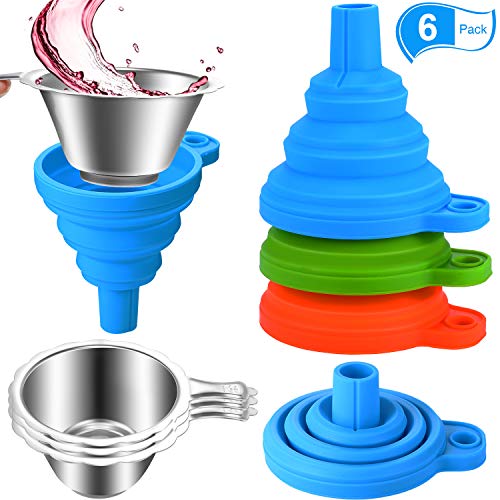 Quality filter:
Made of quality stainless steel, durable, designed with wide mouth to ensure a smooth and no splash operation, easy to use and clean, can effectively filter debris from failed prints, broken media and other cured pieces.

Multifunction funnel:
Made of quality silicone, soft and flexible, can not only be applied to pour resin back into a bottle, but also suitable for transferring liquid and powder, ideal for salt, pepper, herbs or spices into a shaker or jar, or transferring oil and vinegar into cruets.

Notice:
The colors may exist slight difference due to different screens.

As 3D printing technology inches into the mainstream, users of various devices are requiring easy compatibility between their PCs, laptops, and tablets, and the various desktop 3D printers currently on the market. While we’ve seen Microsoft push forward with initiatives to better integrate 3D printing into their Windows 8 and Windows 10 operating systems, we are still a ways away from the ease in compatibility seen within the 2D printing space, and Apple’s Mac compatibility is still seemingly lagging behind.

This week, however, is an interesting one for the world’s most expensive company. Not only has Apple been issued a patent for a stylus which can 3D scan objects, creating models which could then be 3D printed, but they’ve also announced an update to their Common Unix Printing System (CUPS). In the CUPS version 2.1, release candidate 1, the Apple supported printing system has added basic 3D printer support.

CUPS, for those not familiar with the system, functions for Unix-like operating systems and allows the computer to act as a print server, accepting print jobs from client computers using the Internet Printing Protocol (IPP) before processing them and sending them off to the appropriate machine to be printed. The system was adopted by Apple in 2002 for Mac OS 10.2, and in 2007 the source code was purchased by Apple as they hired its chief developer Michael Sweet.

The update, which includes several changes, bug fixes and additions, will now support only basic 3D printers, with no built-in filters, based on the Printer Working Group White Paper policy and template, according to the CUPS.org blog. What this means is that most of the common open source printers will be supported, but the 3D printers which are built on a closed framework likely will not. The other changes in this version include:

While this is good news of Mac users looking to streamline the 3D printing process from their computers, there is still a ways to go before the 3D printing process is as easy and effortless as its 2D printing counterpart. Unlike the 2D printing space, where a few companies dominate the market, there are literally hundreds of 3D printer makes and models out there, making near-complete compatibility something which will take a lot of hard work on the part of developers.

Let us know your thoughts on this latest update in the CUPS 3D Printer Support forum thread on 3DPB.com.

Cycling is often seen as a universal pasttime, a sort of social leveller. So perhaps the bike-powered 3D printer is the perfect example of bringing technology to the masses.

Fabraft, a  a Taiwanese design factory, has created a bike-powered 3-D printer which breaks down plastic cups to make bike parts, with the aim being recycling plastic and making technology more accessible to ordinary people.

The Mobile Fab’s inventor and Fabraft co-founder Kamm Kai-Yu used open-source software to build a small 3-D printer, powered by the turning of bike pedals. The plastic cups are ground into powder ink, which is then ‘printed’ into a wearable medallion with a light attached, in a process that takes about two hours.

“We wanted to do something to bring both recycling and 3D printing closer to average people,” Kamm Kai-yu told Yahoo News.

Anyone can bring along plastic cups, widely used in the country for pearl-milk tea, to the factory and wait for their own trinket for free.

“We built everything from scratch using designs and instructions freely available online,” said co-founder Matteo Chen.  The engineers now plan to build a bigger version with more printing power, and one where the tools can be swapped over to perform other tasks, like laser cutting.

The whole project has been partly funded by the government in the run up to Taiwan’s stint as World Design Capital for 2016.

To see how it works, here’s a video: